Last night I had the pleasure to dine at Stelle di Stelle, the all Italian pop up restaurants hosted in Harrods’ lower ground floor (past the bling, next to the fine wines and the whiskies) by Identita’ Golose, the Italian food congress and all around great website founded by Paolo Marchi which I collaborate with. Since last month and until January, a number of Michelin Italian stars will take turns at the pass to showcase the best of their own creations, intending to bring their ‘restaurants’ the UK dining audience.
This month is the turn of 3 stars brothers Enrico and Roberto Cerea from Da Vittorio in Brusaporto, a place not far from Bergamo in the Lombardy region. Enrico was present last night, always smiling and visibly at ease despite not being in his own kitchen. The dining room is pleasantly set up even without any natural light, Hues of white and cream, food photography on the walls and a small but welcoming bar area at the entrance.
The menu by the Cerea brothers was mouthwatering, each course also expertly paired to an Italian wine or even a beer for those who wish to go for the full monty. While not the cheapest of meals (£115 for dinner, £140 with wines), given the stature of the chefs involved and the location, it is in my opinion a worthy cost and very much in line (or lower) than similar ‘pop ups’ that happen in the City of London. The meal opened with a Ferrary Trento Doc Brut and some pure parmesan and parma ham (and why not!). Swiftly followed a fast turnaround of various courses: Cantabrico anchovies, tuna sauce and Piedmont hazelnut, a morsel of saltiness delicacy which, in the wise words of Paolo Marchi: “only one downside: even if they had served us a dozen each, they would not have been enough to satisfy the need for deliciousness burning in a true gourmand”

The next course was simply beautiful in visual as well as flavours: Langoustine tail with almond cream and roveja wild peas, my favourite of the savoury courses. Then, a couple of intense, solid and perhaps a little ‘wintry’ dishes: first, Soft polenta, robiola cheese, white truffle and grana padano sauce. I personally found the cheese a little overpowering but polenta and cheese is always a winning combination (especially on a ski slope!).

Right after, potato gnocchi filled with white cheese fondue, and laden with the most wonderfully aromatic fresh truffle. Delicate, despite the cheese, it was indeed a very good course. Finally, a pan seared Sea bass with yellow tomato cream and potato foam. I loved the fish itself, it was peppered with a caper marinade, gently grilled, yet I could not really detect the tomato flavour itself.

The dessert that followed was my favourite dish of the whole menu, and my kind of dessert: beautiful to the eye, fresh to the nose (served with mint and lime leaves in dry ice smoke), each element matched the rest in harmony: Avocado mousse with horseradish cream, lemon and yogurt sorbet, lemon ice and moorishly crunchy caramelised macadamia nuts, it was divine. 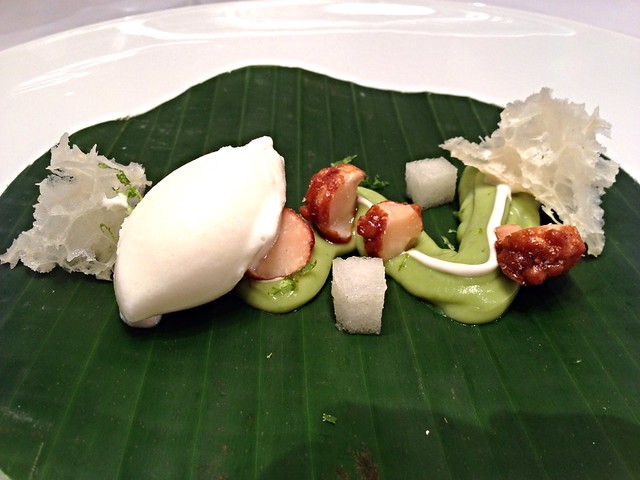 We also received a small pastry cone with zabaione cream and some chocolate panettone, as an extra sweet addition. Followed by coffee, the meal concluded. Stelle di Stelle is a great opportunity to try some of Italy’s finest chefs, from North to South: different styles, different ingredients. I am very much looking forward to more.

I was a guest of Identita’ Golose crew. Opinions are my own.