Around a year ago I got Jason Atherton’s book (Gourmet Food for a Fiver). Back then, in my first days as a ‘foodie enthusiast’ I actually did not know much about Jason, but found the book pretty good, with an interesting selection of recipe and flavours.

A year later, I know a bit more about him, and therefore as soon as the booking line for his first restaurant (Pollen Street Social) opened in April, I started dialing in to try and get a table for myself and the family. This followed a meeting with the chef himself at a book signing in Harvey Nicks in March,when he happily signed my book joking that an Italian should buy a British chef’s cook book.

In fact Jason’s food is proudly British and our waiter at Pollen Street did not miss out on the opportunity of telling us how British any of the dishes was.

But let’s start from the beginning.

Pollen Street Social, right in the heart of London’s posh Mayfair, is a large venue, with loads of staff running around, smart concierge desk, long bar in the first room and the famous ‘dessert bar’ in the second, main room. At the back, the kitchen is visible and so is Jason, fully immersed in the busy task of running the kitchen. It took a while for us to get the menu, but when it finally arrived, it did have plenty of choice for everyone and as the waiter explained, one can choose the usual starter and a main or have a few different ‘starters’ to build up a bespoke tasting menu.

After ten days eating out in Cornwall we all went for the standard formula and ordered two dishes each. We were explained how British some of our choices were (pork belly for example, the ‘proper English food’) and received a lecture on Loch Duart sustainability. Fair enough, I might know it all but not everyone does, however the guy did not take a breath until he had finished the whole palava about the salmon farm, and did not give me a chance to stop him and spare him the energy.

In any case, the starters arrived and they were all beautifully presented – shame I left my iPhone charging and was unable to take photos! The dishes also got beautifully explained buy our friendly, if a little too keen, waiter. A lot of exotic influences (my Loch Duart salmon had a Japanese vegetable as garnish, my dad’s pate was marinated in port wine), but also very good flavours coming through. The only disappointed diner at this stage was my now famously fussy husband – I did taste his squid dish and yes, I admit, it was a little strange, as the squid was a ‘back to front risotto’… and possibly too bland a version.

With the mains, a similar thing happened. Each dish was thoroughly described, and so fast that I did not have time to translate for the benefit of my parents. Except my husband, we all had meat dishes and these were the winners. My ox cheek was braised to perfection and my sister picked up my bit of tongue too, loving it (I just could not bring myself to eat it); mum did enjoy the very British pork belly and dad really liked the lamb however claiming that it did not taste very ‘lamby’.

Unfortunately Robert opted for a monk fish (not such a sustainable option) which came with asparagus and broccoli, and so far so good (it was pretty well cooked and seasoned), but this was accompanied by a Spanish paella with chicken and prawns which did not look particularly authentic and did not go with the monk fish and its flavour. He was by now quite put off to even enjoy a dessert, but we did – a tiramisu which was nothing like the actual tiramisu but made the parents very happy and a cheesecake with rhubarb sorbet which looked great and was in my sister’s word a little too ‘fish glue’ but was still enjoyable.

The rhubarb strips were fairly tough and very minty, which I liked, but I still had fresh in my mind Tristan Welch’s rhubarb dessert and that still holds the first place among my favourite rhubarb desserts. Luci and I went to say hello to Jason before we left and he was available and friendly and thanked us for the positive feedback.

On our way out myself and Luci (why not mum?) got a little goodie bag (very cute) with a tea bag and a couple of mini cakes, which unfortunately were too sweet and a bit soggy. Nice touch, but maybe unnecessary. A mention should be made of the salt cod brandade which was served with the bread at the start – to me, that is the best flavour of the night and the one that I shall remember over anything else. Absolutely delicious!

My family loved Pollen Street Social, my husband really did not. I enjoyed it and I am keen to go back, but that will probably have to be as a single woman! 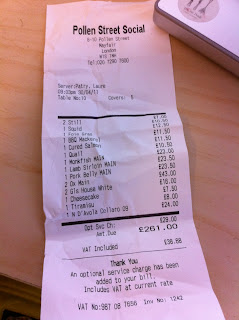