“There’s never been a classic movie made in Bruges until now. (In Bruges, 2008) 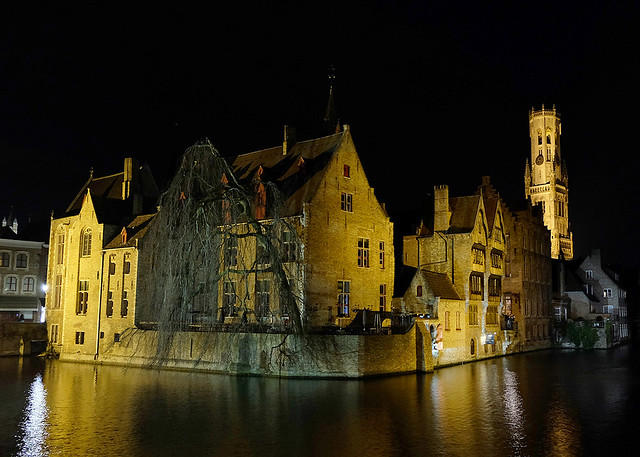 Since the summer’s long way down and back, I love using our car for long or short car trips. We can take the dog, we can explore and avoid airport queues. For Easter this year, we opted to cross the channel again, and spend a couple of days in the historic town of Bruges. I had only visited for a few hours many years ago, and only had vague memories so it seemed a good choice, at under 200 miles from London (one way).

After queuing (can’t escape) for ages on Easter Friday on our way to the Euro Shuttle, we made it to Bruges around 9pm. Surprisingly for a heritage town, you can drive right into the very centre (unlike many places in Italy), and it was fairly easy to navigate the one way system to our hotel, Martin’s Brugge. We picked the hotel based on cost / quality and reviews but also because it allowed dogs and had a car park.

The hotel’s position is absolutely perfect, about one minute walk from the canals, the Burg and Markt squares but in a quiet street so sleep is great. Renovated recently, it is a 3 star which offers great value for money although in our view, the extra charges for the dog (25euros per night) and the car (the same) add up to the bill and are above average.

Bruges is really picturesque and was full of tourists, despite the recent tragic events in Brussels. Walking around the cobblestones streets at night is beautiful. Gone are the big crowds, the touristy shops are closed and the lamp lights cast long shadows on the stunning medieval buildings that are so well preserved pretty much everywhere. We found that exploring on foot without a fixed plan is perhaps the best way. The boats offer a different point of view  but they are absolutely packed even in winter, so I am not entirely sure I would enjoy such a sigh seeing method. 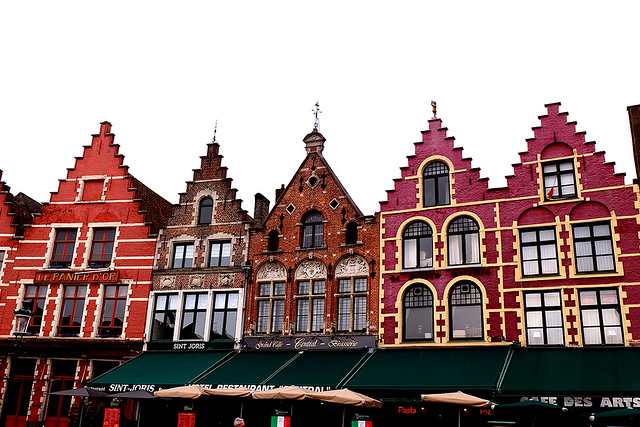 From our hotel, we started walking around the main squares, the Markt first, sadly full of tatty amusement rides (why?) but still majestic with its historic buildings such as the Historium and the pretty houses with coloured bricks. The Burg square, just around the corner, is a little more quaint, free of trashy stands and with the Stadt Huis (don’t miss its ceiling, despite the entry charge) and the Holy Blood Cathedral (not ideal to visit this during Easter mass!). Every street, from the main through fares to the side, quieter alleyways, hide architectural gems of the Middle Ages.

The canals add charm to the city, the walls of the surrounding buildings perilously standing despite the centuries’ old damn. Ducks, swans and mallards fight for their place on crumbling steps and private gardens. Slightly further south, the Beguin hof is a famous, calm, quiet area still used as a nuns’ convent right by the canals by Minnewater. Geese and swans surround it, and millions of yellow daffodils grace its internal garden. The houses here date from the XIII century to the XIX, are all painted white and make for a pretty walk slightly away from the throng of the crowds.

Nearby there are a few museums, and I absolutely loved visiting the Old Sint Jhan Hospital. This period building dates back to the XIII century and has been used as an infirmary and hospital well into the 70s when it was finally closed and transformed into a museum. Marvel at the wood beam ceiling and massive columns in the main halls (where patients used to be cared for), and marvel even more at the collection of medical instruments from the XVII and XVIII century. Eye surgeries, brain operations, kidney stones utensils, it was a fascinating visit, just a shame not everything is available in English (or any language other than Flemish) so a little hard to understand.

Part of the museum is their current exhibition on Brueghel’s Witches, which has got more witches than Brueghels but it’s really well put together, with a lot of art works and information and some fairly gruesome details as well. Don’t miss the Old Pharmacy around the corner, included in the price of the ticket and is just as fascinating with lots of old jars of medicaments and herbal remedies. it used to be administered by nuns until the 1970s as well. 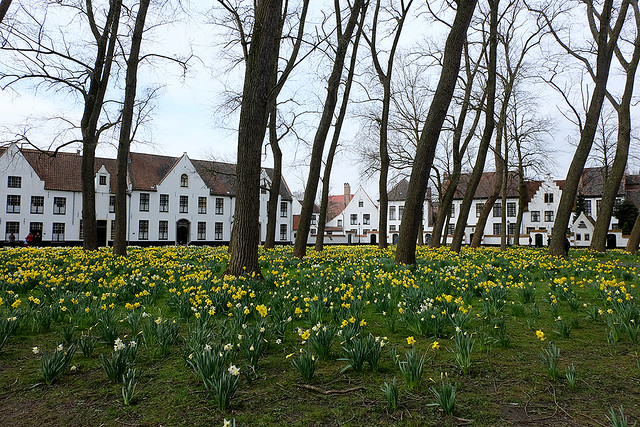 What about the food?

On our first morning, we wandered north, in search of breakfast, not wanting to stop in one of the many tourist traps in the main squares. We stumbled across Achiel, recently opened local cafe: welcoming (they allowed Amber in), with a small breakfast menu and very friendly service. I had the fluffiest, fresh croissant ever, beautifully fresh multigrain and white bread with butter and jams and @bmcboy a cooked ‘English’ breakfast. While the quality could be better (the coffee was certainly in need of improving) the place was just lovely, with a great relaxed vibe and no tourists other than us.

The second day I thought we could try Pain Quotidien since it did start in Belgium, and there you go, it was the only place where they did not allow Amber in. So we walked to next dorr cafe’ Brazila which was local, friendly and actually had great coffee and breakfast, with yogurt and granola and cakes as well on offer, papers, and a cosy feel to it.

We did not do so well for lunch. Having walked all the way back south towards theBeguin Hof, we were starving and thirsty and picked the least offensive looking of the horrible, tacky looking touristy restaurants. We expected nothing much, and we were served a pretty awful lunch (how could they get Moules mariniere and an omelette wrong, fails me). yet they allowed Amber to come inside, so there’s a small plus.

Yet Bruges is a town full of great restaurants, if you know how to find them (Hertog Jan, just outside) if you can afford them (de Karmeliet, 3* and over 300 euros pp) and if you book ahead (Bistro Pro Deo, we missed out). For our dinners, we actually went twice to the same place, as we loved it the first night. Open later than others, dog friendly, fair prices and away from the dreaded tourist traps, it was recommended to us by our hotel concierge and what a great place it was! Bistro Christophe offers traditional Belgian food with some classic dishes (burgers, steaks), yet everything is prepared really well, the portions are large, and the food very good. We couldn’t recommend it more. 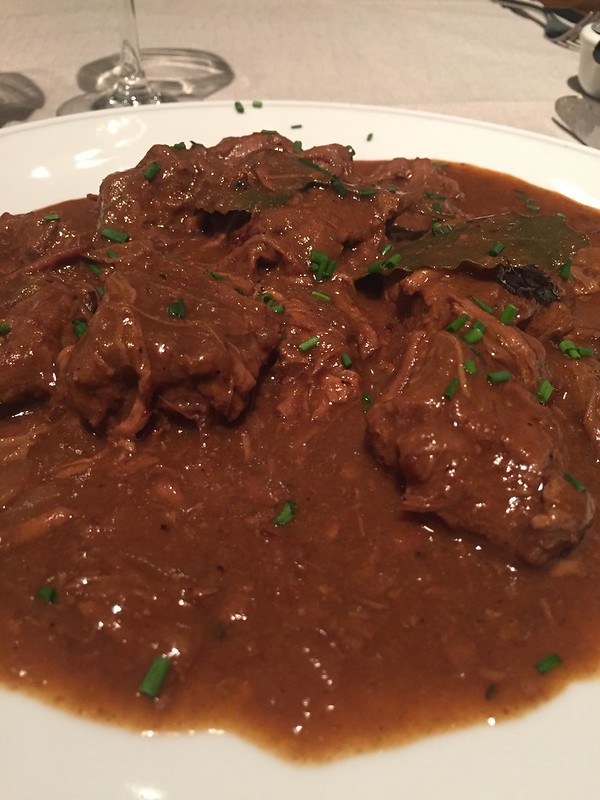 Of course, chocolate and beer are also pretty much everywhere. Shops selling chocolates in all shapes, form and prices are on every street and so are beer pubs and breweries and shops. While I am not a huge fan of beer, I am a fan of chocolate. Not easy to figure out what is actually a good quality store among the many. We bought some chocolates and small Easter eggs from Galler (appointed by the royals), bought a bar or two from the Chocolate Line, one of allegedly the best producers and had a hot chocolate from Dumon. Now, this is the only place where I actually saw a ‘hot chocolate menu’ (from spiced to different intensity of chocolate), yet it is is served like everywhere else as a block cube which you then melt stirring it in a glass of hot milk: 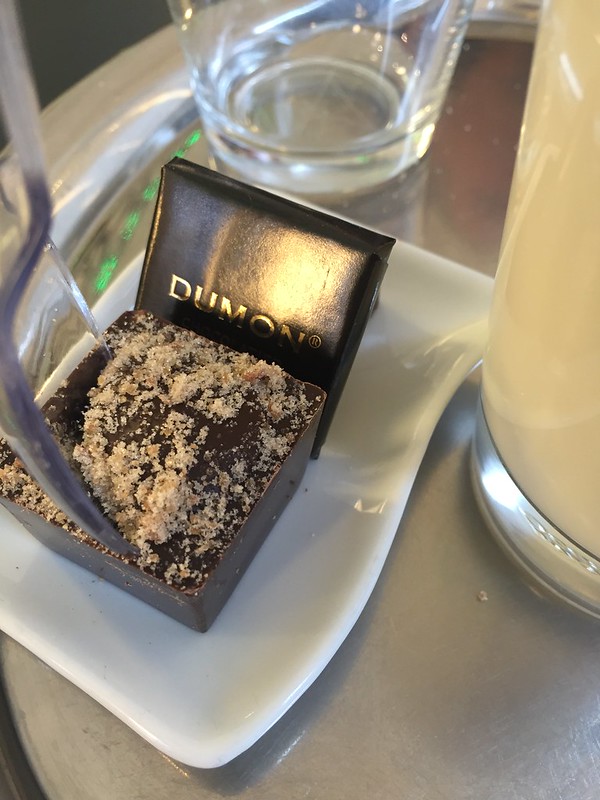 Call me Italian, but our own hot chocolate has nothing on these Belgian ones, milky and frankly, very bland. A novelty perhaps but nothing to shout about. Same goes for waffles, every where you turn. No need to eat a waffle in the street from a packaged plastic wrap just because we are in Bruges. I am a grumpy old woman, yes but I might as well watch my calories. I walked in what looked like a  nice bakery shop with loads of variety of biscuits, from speculooos to waffles, from macarons to mashmallows, yet, apart from the overwelming smell of butter and fat as you enter the premises, a quick read of the ingredients reveals palm oil and the likes. Misleading, and disappointing.

Feeling we had gotten to know Bruges well enough, we decided to avoid driving to Ghent on Easter Sunday, and instead, pay our respects to some of the (many, so many) cemeteries and memorials in the Flanders area, testimony of the fierce fighting during the great war. It was not easy to pick a route, so many are the battlefields around here. We drove south towards Ypres and stopped at Tyne Cot Cemetery, a British and commonwealth humbling grave site, with so many graves, and so many unknown ones too.

A small memorial museum is on site, and it’s very interesting as well as emotional to stop here. A female voice in the background reads the names and age of the dead soldiers, on loop. The recording is probably hours long. Around Tyne Cot there are many, many cemeteries, pretty much every kilometer or so you see a sign indicating one. The sheer amount of these gives us, 100 years on, a small glimpse into the tragedy that WWI was. 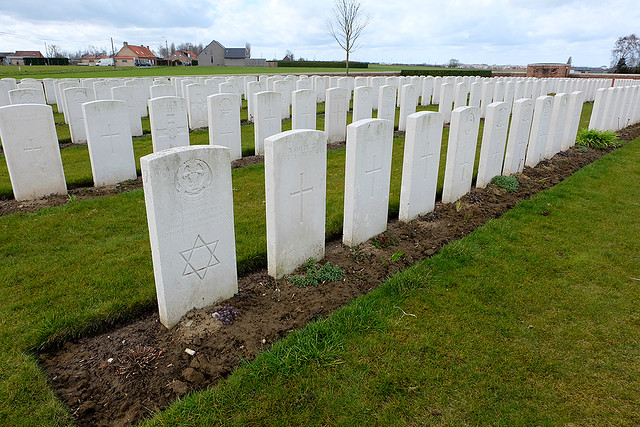 We also stopped at Passendale, another battle location, where a museum and a memorial stand today, peaceful and pretty and hiding the fighting that went on right here. Poppy shaped memorials are being assembled until 2018, when the centenary of the end of the war will see many celebrations.

Not far, we drove to Hill 60, again only one of many battle sites. Fairly empty but well laid out, the ground bears the scars of the fighting with hills and holes, and has been left pretty much as it was, giving a bird’s eye view of what it would have been like during the fights. A few items are scattered around here, including a well preserved pill box, a big mine, a memorial to the Australian tunneling team (with bullet holes from WWII) and the markings of where the British and the German front lines were. These are only about two meters apart and standing by them, really put a lump in my throat. 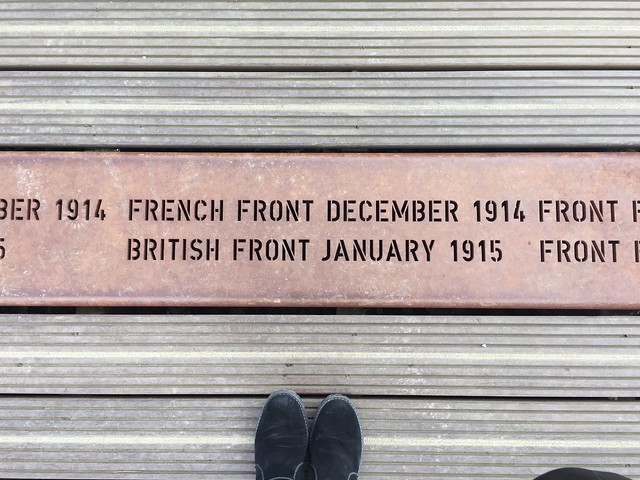 On our way back to the channel, we drove by the seaside; windy and frankly pretty dull, we did not stop and drove straight to France, where we let Amber walk around the Dunkirk dunes, even here with wall defenses and pill boxes pretty much everywhere.

Bruges and Flanders are a beautiful place and definitely worth a trip from the UK. One way is around 180 miles so very feasible for a weekend. 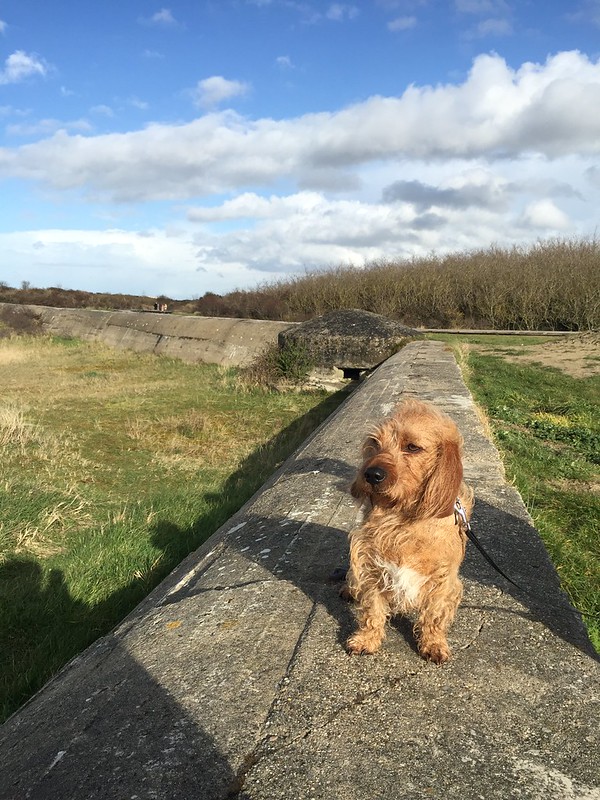 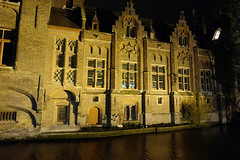