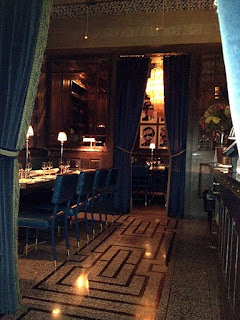 When I have VSG (very special guests) visiting from Italy, I usually try to find new, appealing and interesting eateries to treat the guests and make their London stay as enjoyable as possible. After an extremely good and unplanned meal at Baltic the night they arrived, a couple of days later I took them to the pre-planned, pre-booked Bob Bob Ricard. Having read amazing reviews from fellow bloggers (London Foodie and Cheese and Biscuits amongst others), I felt it would be the right place for a special night out. 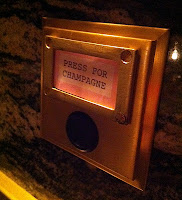 Right in the heart of Soho, opposite the other trendy food venue that is Polpo, Bob Bob Ricard is indeed a beautiful place. Professional and friendly welcome, with a frankincense scented candle burning in the dimly lit reception area, it immediately felt like the right choice. We were ushered to our alcove by an elegantly dressed waiter, through the main dining area, taking in the gilded surrounding, the flickering lights, and the pleasant buzz of the busy Saturday night.
Our table was great, perfect for a meal with family where one can actually speak to one another, on comfy dark green 1950s Wendy’s booth seats, the now famous ‘Press for Champagne’ button and, more curiously, wall plugs next to it.

While we studied the menu, packed with loads of great choice, we ordered some aperitif. Again, trusting what I had read online we ordered a couple of signature Rhubarb G&T and a Seasonal English Bellini. Mmm. Here came the first disappointments. I absolutely love rhubarb in all its forms, including juiced. Yet this G&T had only a vague hint of the pink vegetable, nor any particular alcoholic flavour to it – I found it bland. The Bellini was actually verging on bad, as the pear juice used did not really go well with the champagne; it might an acquired taste, but it was certainly a disappointing start to a meal I had been so looking forward to.

We all passed on starters, and went straight for the mains, which might have been a mistake, given that some of the starters sounded particularly interesting.

The Beef burger @bmcboy ordered was well cooked and intensely flavoured, but kind of average. The presentation in my view was below average, nothing special about it, the sesame bun slightly burnt. Chips were closer to a fast food quality than a proper hand cut variety. Even Giraffe has much better chips than BBR, and we did not really understand the paper box serving. Trying to be creative? Doesn’t quite work for me given the rest of the surroundings, including the British made (yes!) elegant silver cutlery and crockery. 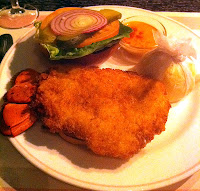 The Cornish crab with quail egg was a good choice, moist and full of fresh crab, yet it also lacked in presentation and came with barely anything else. My Lobster sandwich was.. well. Im not sure what it was. A breaded and fried lobster tail which was well seasoned, but is this really the way to prepare such a delicate produce? I enjoyed it, I am not saying I did not but it did not blow me away.
The bun was also slightly burnt but a pleasant brioche. Gerkin, tomato and salad were the same as pretty much anywhere else, and the Mary rose sauce was just a Mary rose sauce. I also had a box of fast food style chips (charged extra, and I don’t even remember asking for them). At £24, this was, in my view, just an overpriced crayfish sandwich with no particular thought behind. The Linguine with Bottarga and Dried Caviar were al dente and full of bottarga, but at £28 the most expensive dish of the meal!

We did leave room for dessert.

My VSG shared a Caramelised oranges with pecan and pistachio nougatine which was probably the best dish of the whole meal. Sweet but tart, a well put together dessert.
I treated myself to a Strawberry and Cream souffle. It arrived in record time (less than 8 minutes) and looked fabulous (and was relatively cheap at £6.75). The top part was indeed very good… yet as I progressed further down the pot the egg became too overpowering. No comparison with the Hand and Flowers amazing piece or the Savoy Grill delicious creation. @bmcboy ordered a trio of home made ice cream, which were creamy and gently flavoured. He did not like the salt caramel scoop but we thought it was actually very good, salted to the right level, and polished it off.
The wine list at BBR is incredibly well stocked – well, we think so because it features a  number of Central and Southern Italian wines. We ordered a bottle of Verdicchio di Matelica Belisario, which is a wine we enjoyed a lot of during our recent break in Marche. But even on the wine, BBR was not really up to scratch – the bottle was not cold at all and had to be held in the ice bucket until well into our main courses.
The bill came to 187£. It’s fine given the location, the venue and the service, but for the quality of the food we enjoyed, it is a tad too expensive. I would go back, and I would try the starters too.