A meal at Benares, Mayfair

After the appalling experience at Hix Soho, I was not feeling really up for another big dinner, at another West End expensive eaterie. But alas, all in support of the food writer sister… we thus made our way to Berkeley Square right in the heart of the elegant Mayfair.

I had been at Benares years ago and remember not being very impressed by the food – rather, I was impressed by the very expensive bill and did not think I would have come back. I therefore had low expectations for this new outing. I needed not fear. On a Sunday night the venue was not full, but busy enough not to feel empty. As a welcome change from the night before, it was quiet, with low buzz coming from the nearby tables and people who knew how to be behave in a certain environment.

We were welcomed by a glass of champagne and given the menus, while also enjoying some crispy mini poppadums and yummi dips. I promptly spilled some of the best one on the white linen, in my eagerness to munch on the them. Embarrassing.  The menu here has some variations on Indian classics such as tandoori and murgh dishes, using staples not usually seen in your average Indian eaterie, and it is a pleasant change. Atul Kotchhar has certainly built a menu that has something for everyone, including my very fussy better half. 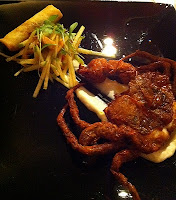 We all chose different dishes, and when the starters arrived, we peeked at each other plate in awe. I had a whole Soft shell crab with an apple and peanut salad, which was hugely better than Hakkasan’s; My sister chose Rabbit sheesh kebab with chicken liver masala and  paratha, which she told us, is a bread from Kerala. Her starter was possibly the best, with an interesting mix of flavours and a beautiful masala.

My husband opted for a Chicken tikka pie, which he confirmed to be flavoursome but a little dry. I am sure if you read my posts regularly you might begin to notice a pattern emerging, but let’s leave that for another post. 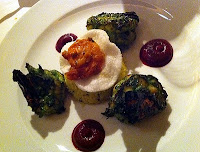 Our mains were also appealing combinations. Rob enjoyed (yes, he did) a Rodney Marsh Rump with celeriac purée, and my sister also opted for a meat dish of Roast Deer with sesame nut sauce. I tasted it and thought it was very good, but it was my dish that really put Benares high on my list of favourite Asian restaurants.

I had Kaffir Lime Marinated Tandoori Prawns. I absolutely loved it. The prawns were big, juice and the marinade was spectacular. The lemon rice was a great complement and the pickled prawn was a nice addition. Fabulous.

Our side dishes were also highly enjoyable, making us completely full.. or not? Not really.

We went for one dessert to share, choosing Cardamom chocolate fondant, and again nothing faulty about this dessert. With the bill, we also received some petit fours, which we felt unable to leave on the table.

Needless to say, we rolled out of the venue, past the beautiful water feature, down the stairs and into the refreshing cold evening air.
The meal was not cheap, and my sister picked up the tab, paying around £240 which included a bottle of white wine as well. It is a Michelin starred chef, and the quality of the service matches the high quality of the food.

My week had begun with a visit to an Indian restaurant in Brick Lane on Monday (not by our own choice). Thankfully, it ended with Benares.